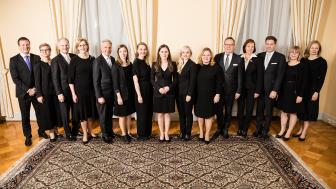 On Tuesday 10 December 2019, the President of the Republic appointed Finland’s 76th Government. On the same occasion, the President of the Republic released the ministers of Antti Rinne’s Government from their duties. The Government led by Prime Minister Sanna Marin has 19 ministers. The Social Democratic Party has 7 ministers, the Centre Party 5, the Greens 3, the Left Alliance 2, and the Swedish People’s Party of Finland 2.