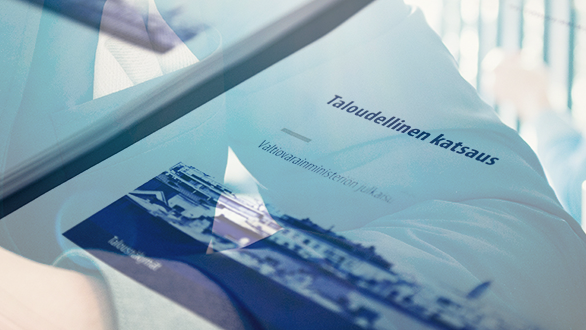 The short-term outlook for the Finnish economy remains positive despite bad economic news from elsewhere in the world. In the coming years, economic growth will be based more strongly on domestic demand according the forecast of the Ministry of Finance in its latest Economic Survey.

The Finnish economy will grow by 1.5 per cent this year, slowing down to around one per cent for the next few years. Uncertainty in the operating environment is reflected in the expectations of Finnish companies and consumers. The role of public consumption and investment in gross domestic product (GDP) growth will be highlighted, especially in 2020.

Finland’s public finances suffer from a structural deficit, which is expected to grow over the next few years. Public finances will be weakened by a slowdown in economic growth, higher expenditure resulting from an ageing population and the spending increases envisaged in the Government Programme.

In the medium term (2022–2023), economic growth will slow down to less than one per cent, which is due to structural factors affecting the economy. Because of sluggish economic growth, there will be little improvement in employment. The employment rate will edge up to 73.1 per cent in 2023.

“According to the forecast, economic growth will slow down to under one per cent. That is not enough for the needs of the welfare state! For that reason, measures seeking sustainable competiveness and higher employment and productivity must figure high on the economic policy agenda,” says Mikko Spolander, Director General of the Budget Department of the Ministry of Finance.

Many uncertainties related to external environment

World trade growth has slowed down in 2019 as a result of uncertainties arising from trade conflicts. However, growth will pick up in 2020, driven largely by the euro area and emerging economies. World trade growth will be at its slowest this year, but it too will accelerate from next year onwards.

This year, GDP will still grow by 1.5 per cent, but the growth rate will fall to 1.0 per cent next year and further to 0.9 per cent in 2021. The demand for Finnish exports will decrease sharply in 2019, primarily due to a weaker outlook in Europe. Trade tensions between the major economies will have an impact on world trade, and indirectly also on Finnish exports.

Households will invest less in residential buildings, as a result of which the share of investments in GDP will decline. Growth in production investments will also plummet. Private consumption will continue to grow due to higher earnings and high employment. However, the growth rate will be slower due to higher household savings.

Spending increases in accordance with the Government Programme will boost public consumption and investments and contribute to maintaining domestic demand.

General government expenditure has remained higher than revenue throughout the economic upturn. Finland’s public finances suffer from a structural deficit, which is expected to grow over the next few years. General government debt as a proportion of GDP will start growing again in the early 2020s.

Public finances will be weakened by a slowdown in economic growth, higher expenditure resulting from an ageing population and the spending increases envisaged in the Government Programme. The ageing of the population increases expenditure on pensions, health care and nursing every year, even if no new decisions to boost spending are made.

Only the measures envisaged in the Government Programme and included in the General Government Fiscal Plan are considered in the projection for public finances. So far, nearly EUR 1.4 billion for measures in the programme of future-oriented investments have been included in the General Government Fiscal Plan, while the Government Programme envisages implementing a maximum of EUR 3 billion in one-off future-oriented investments between 2020 and 2022. If one-off spending increases are implemented in full, the general government deficit may exceed the forecast for 2021–2022.

The forecast mostly involves downside risks and these risks have increased over the last few months. Escalation of the trade conflict is the key risk overshadowing the global economic outlook. This risk is heightened by the possibility that the parties will weaken their currencies to gain a competitive advantage. A downturn in Germany would delay economic recovery in Europe.

The greatest risk arising from the domestic economy is the faster than predicted decline in housing construction investments in the short them. The role of large projects as a long-term risk factor is highlighted in the forecast. Without decisions on large projects, the growth in investments would be substantially weaker.