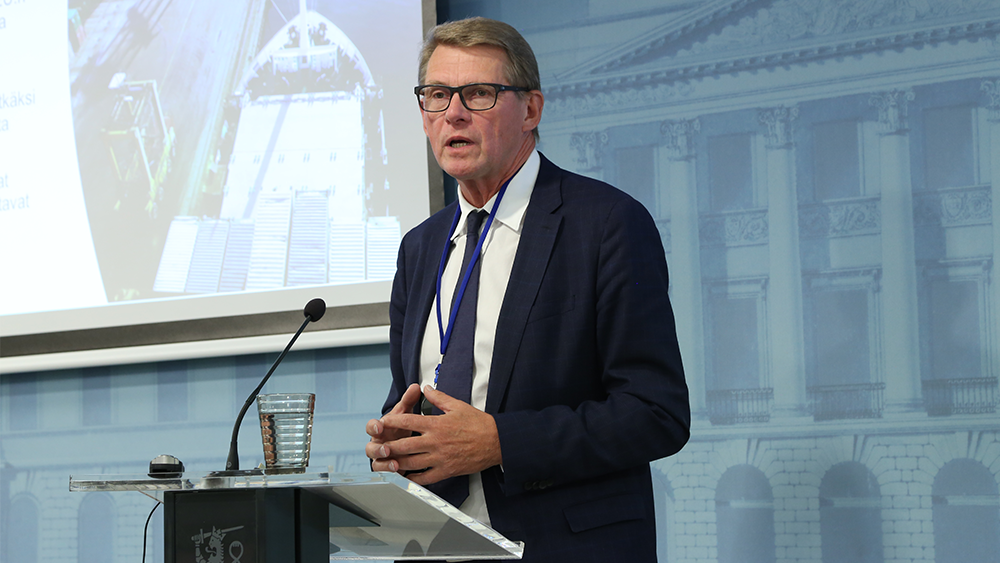 Minister of Finance Matti Vanhanen’s draft budget for 2021 is aimed at building confidence and sustainable growth throughout Finland. There is uncertainty over the outlook for the global economy and the coronavirus pandemic. It is therefore essential that the decision-making on national economic policy is proactive and coherent, and strengthens the prospects for increasing exports.

“I share the concerns of many about the Government’s rapidly growing debt. My task is to bring this growing debt level under control. This means that the Government must see to preventing the spread of the virus and must return to the spending limits rule. Prompt decisions must also be taken on employment measures and health and social services reform,” says Minister of Finance Matti Vanhanen.

The Ministry of Finance’s draft budget adheres to the policies outlined earlier by the Government and supports sustainable growth. The draft budget totals EUR 61.6 billion and will be published in full on the Ministry of Finance website on Thursday 13 August. The future-oriented investments and the EU recovery package are to be coordinated and decisions on this will be taken later.

The global economy and Finland, too, have fallen into a deep recession as a result of the coronavirus pandemic. During the summer it proved possible to lift many of the restrictions mitigating the spread of the virus, and this is vital for the recovery of the economy. The path taken by the Finnish economy during the coronavirus crisis has been better than anticipated at the start. Until a vaccine or other measures are found to tackle the disease, uncertainty about the future will remain considerable, which will slow the economic recovery.

In Finland, private consumption has recovered quickly, with the exception of certain services. The outlook for exports and investments is less good due to the poorer performance of the global economy. There has been a distinct reduction in the number of people laid off, and unemployment, despite having grown, has remained lower than expected. The Government will have the latest forecast figures at its disposal for mid-September’s government budget session, and the Ministry of Finance will publish its latest economic survey on 5 October.

The Ministry of Finance’s draft budget sets out appropriations for 2021 totalling EUR 61.6 billion. Although this is EUR 3.9 billion more than the approved 2020 Budget, it is EUR 5.7 billion less than the 2020 budgeted total after inclusion of the supplementary budgets.

The Ministry of Finance’s draft budget for 2021 presents a deficit of EUR 7.0 billion. The 2020 deficit, including the supplementary budgets, amounts to EUR 18.9 billion.

Central government debt will rise to an estimated EUR 132 billion in 2021.

The Ministry of Finance’s draft budget is based primarily on April’s General Government Fiscal Plan. The draft budget also contains the spillover effects for 2021 of the spring 2020 supplementary budget decisions arising from the coronavirus situation. In particular, the stimulus package in this year’s fourth supplementary budget will have a broad impact, for instance in the form of payments for multiannual transport infrastructure projects and the support measures for businesses.

The higher level of appropriations compared to the approved 2020 Budget is attributable in particular to payments in the package of business support measures, the increased unemployment expenditure, statutory and contractual index increases, the government pay settlement and additional investments already decided. In line with the Government Programme, the draft budget allocates EUR 22 million to extending compulsory education to the age of 18 and to free upper secondary education. Approximately EUR 53 million is allocated to central government transfers to local government for basic public services in 2021 for the gradual entry into force of the minimum required carer per client ratio of 0.7 laid down in the Act on Care Services for Older Persons. In addition, in order to prepare for the change, approximately EUR 27 million is directed to practical nurse training, raising this by about 2,700 student years.  The Act on Client Charges in Healthcare and Social Welfare will be reformed as of 1 July 2021 with an allocation of EUR 17.9 million. EUR 10 million is allocated to securing the operational capacity of the police and EUR 3.3 million to combating the grey economy.

In connection with preparation of the Government’s 2021 budget proposal, the Government will review the outlook for local government finances and, at the same time, examine the tasks and obligations of the municipalities. The effects of the decrease in the proceeds of Veikkaus on the beneficiaries will be resolved in the government budget session.

The draft budget has a provision of EUR 1.5 billion for the procurement of fighter aircraft, but the need for funding will be clarified as the procurement process progresses. The proposal will include a decision on the total funding of EUR 10 billion. According to current information, payments will take place between 2021 and 2031.

From the start of 2021, the electricity tax paid by industry will be lowered to the EU minimum level, which will reduce tax revenue annually by approximately EUR 245 million. This will automatically reduce energy tax refunds paid to energy-intensive businesses, as such refunds will no longer be possible. The remaining tax relief on the use of fossil energy will be reduced in a gradual manner that will allow a reasonable adjustment period for the operators. Overall, this will support the electrification of industry and a reduction in emissions. The lower electricity tax will affect a larger number of companies than the present electricity tax refund system.

The halving of fairway dues will continue. Recovery by means of infrastructure building will gather pace in 2021, as the road, rail and waterway projects decided in this year’s fourth supplementary budget will be advanced as planned.

The application processing backlog in water and environmental matters at Vaasa Administrative Court will be reduced, bringing forward investments. Phasing out the use of coal will be brought forward by allocating EUR 60 million to the total budgetary authority for energy aid for investments replacing coal.

Businesses will be encouraged to make intangible investments through the introduction of a fixed-term additional tax deduction for R&D related research cooperation in the period 2021–2024. Businesses would be granted an additional tax deduction of 50 per cent for expenditure on research and innovation projects carried out in cooperation with higher education institutions and research institutes.

The draft budget does not propose any changes to the taxation of mining activities. A study examining the introduction of a mining tax will be completed in spring 2021, after which tax measures affecting the mining industry will be assessed as a whole.

Tax decisions in line with the Government Programme

As part of the reduction of business subsidies, the lowering of tax subsidies for synthetic diesel will begin in 2021, which will increase tax revenue by EUR 23 million. Tax base strengthening will continue by decreasing the tax deductibility of housing loan interest. An index adjustment will be made to the taxation of earned income to ensure that there will be no increase in taxation due to the increased general earnings level or inflation. The draft budget includes an increase in the threshold for VAT liability, to EUR 15,000 from the beginning of 2021, which is estimated to reduce annual tax revenue by around EUR 20 million.

The real estate tax reform, as referred to in the Government Programme, will enter into force only in the 2023 taxation. The reform will be postponed by one year, because further information and additional impact analysis is needed for drawing up the related guidelines. In the same connection, sufficient time will be ensured for the information system changes required by the reform. A government proposal is to be submitted to Parliament next year. Through a partial reform, nature conservation areas will be exempted from real-estate tax next year, while at the same time real-estate tax applicable to offshore wind farms will be lowered.

Return to spending limits in 2021

On 8 April, the Government decided to begin preparations for introducing the exceptional situation mechanism included in the spending limits rule. In May, the Ministerial Committee on Economic Policy supported the introduction of the exceptional situation mechanism for the Government, which resulted in a temporary increase of EUR 500 million in the spending limits level in the proposal for 2021.

The government budget session will decide on the 2021 budget proposal and on employment measures, and will consider the roadmap for the sustainability of public finances. The budget session’s agenda will also include a package made up of the EU recovery measures, the Government’s future-oriented investments and the pandemic-related post-crisis and reconstruction measures.

On 3 February 2020, the Government pledged to draw up a roadmap of long-term measures to make public finances more sustainable (Roadmap for strengthening the sustainability of public finances). The roadmap is to be drawn up in two phases. In the first phase, the position paper on sustainability published at the beginning of June identified the potential of different measures to reduce the sustainability gap and set a scheduled target for the consolidation of public debt. The Government's objective is to stabilise the general government debt-to-GDP ratio by the end of the decade. The second phase sets out in more detail long-term measures to make public finances more sustainable. The policy approaches for the second phase will be decided in the context of the government budget session in autumn 2020.

One of the key elements in the roadmap consists of measures to boost employment, and these will be determined in the government budget session. The Government will continue to prepare employment measures in accordance with the Government Programme. The objective is to raise the level of ambition and take account of the impact of the coronavirus crisis on the operating environment. As part of the roadmap, the Government will also set a new employment target in the government budget session, one that is higher than the current target of 60,000 new jobs.

Preparation of the budget will continue during the autumn