Fiscal policy is part of the Government’s economic policy. Fiscal policy objectives, namely how the public economy collects and allocates funds, are agreed in the Government Programme. Decisions on taxation, social security benefits, pensions and their funding change economic structures and accordingly shape opportunities for citizens, households and businesses. Fiscal policy decisions are therefore part of social structural policy and they affect the economy far into the future. The General Government Fiscal Plan (including central government spending limits) and the Budget are the instruments by which the Government implements its fiscal policy.

The Government’s permanent additional expenditure based on decisions will be primarily covered by permanent additional revenue. By decisions of the Government, permanent general government expenditure at the level of 2023 will be EUR 1.3 billion higher than in the spring 2019 technical General Government Fiscal Plan (including, in addition to EUR 1.23 billion, EUR 84 million decided by the Government). Permanent new expenditure will be allocated to strengthening competence and social justice and to climate policy measures. The additional decision-based expenditure will be funded in such a way that tax revenue will increase by EUR 0.7 billion and EUR 0.2 billion of on-budget revenue and expenditure will be reallocated (including EUR 100 million of business subsidies). In addition, attaining the 75 per cent employment goal will strengthen general government finances to the extent that part of this strengthened level can be allocated to additional expenditure, thus reaching the goal of balancing general government finances. Attaining the goal requires measures that support the supply of and demand for labour and alleviate the labour market mismatch. One-half of the measures must be completed by the time of the government budget session in August 2020. If this is not the case, the government budget session will assess the expenditure increases previously decided, which were made relative to the technical General Government Fiscal Plan.

During the parliamentary term, the Government will implement a one-off programme of future-oriented investment that supports the attainment of the Government Programme’s objectives and long-term sustainability of general government finances. Within this investment programme, up to EUR 3 billion will be targeted at one-off investments and socially important experimental schemes. The measures are non-recurrent and they will not increase central government expenditure in 2023. The measures will be funded for the most part through property income so that they will not lead to an increase in the debt burden in 2023. The Government plenary session will decide on the use of these funds based on the preparations of the Ministerial Committee on Economic Policy.

In its Stability Programme, Finland has set as its medium-term objective a structural financial balance of -0.5 per cent of gross domestic product. This deficit fulfils the minimum requirements of the EU’s Stability and Growth Pact and Finland’s national legislation. Under the legislation, the Government will initiate corrective measures if it considers that the medium-term objective will not be achieved. 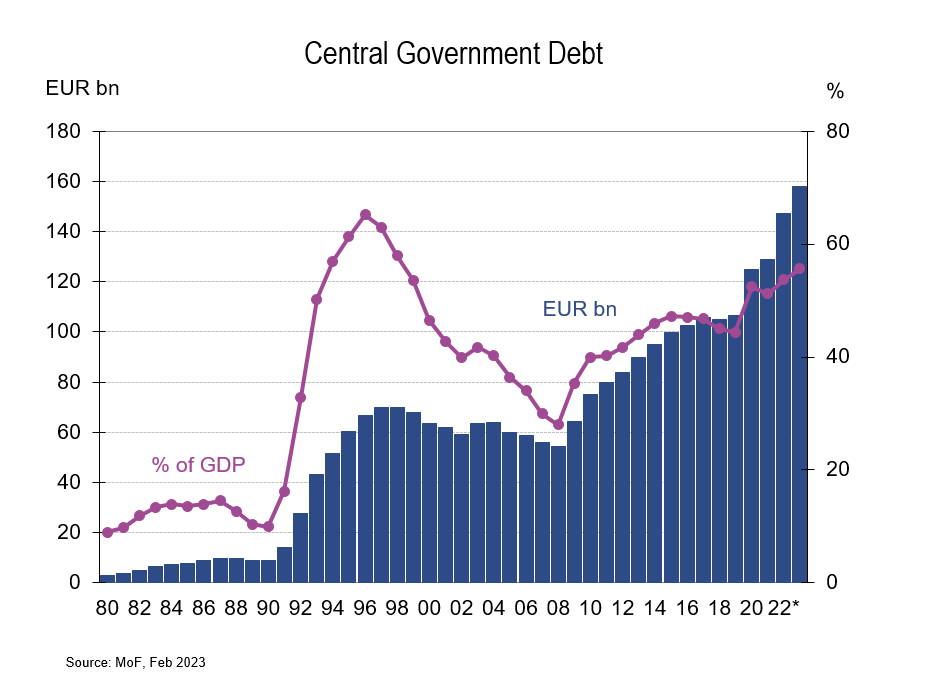