The tasks and sizes of the different agencies and institutions vary. In addition to their administrative duties they, among other things, also see to internal and external safety and security, perform statistical, information management and registration duties as well as develop their designated sectors and disseminate information produced within their sectors for wider use in society. Some of the agencies and institutions operate as government research institutes. 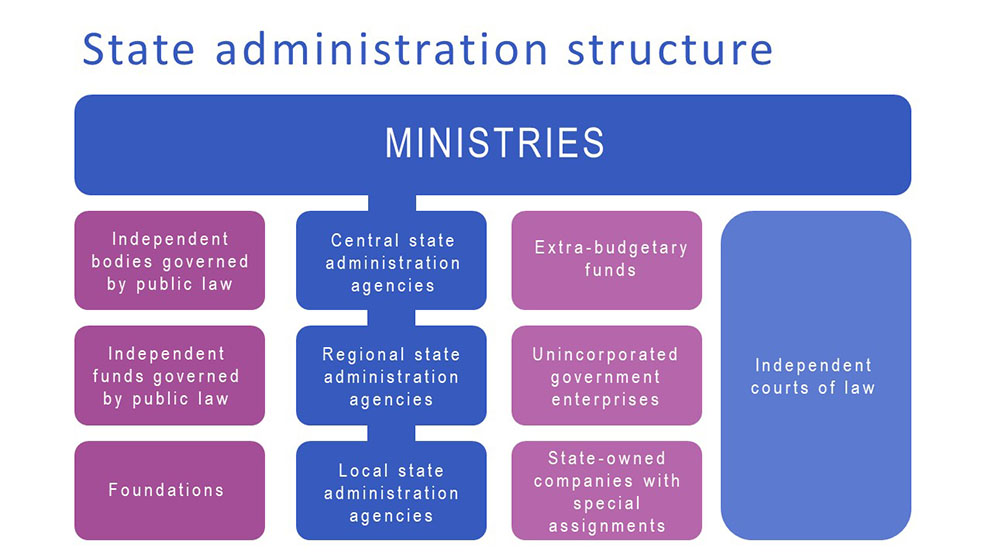 Each ministry within its mandate is responsible for preparing issues that fall within the Government’s remit and for maintaining an effective administration. The ministries’ mandates are laid down in the Government Rules of Procedure and their duties are prescribed in decrees issued on the ministries. Specific provisions apply to each central administration agency operating under the ministries. Measured by their personnel numbers, the largest government agencies are the Finnish Defence Forces, the Finnish Tax Administration and the Border Guard.

The AVI Agencies promote regional parity by implementing legislation and performing steering and supervision duties in the regions.

Centre for Economic Development, Transport and the Environment

Local administration agencies comprise the police departments and the Employment and Economic Development Offices (TE Offices). The agencies also provide their services at shared service points as required by local conditions and needs. The Social Insurance Institution of Finland (Kela), an agency governed by public law which answers directly to Parliament, also has an extensive network of branches.

Central administration development in the 2000s

The central government's basic structure has changed little since Finland gained independence. The highest institutions of state and the division of power between them were defined in the Constitution Act (94/1919), the predecessor of today’s Constitution (731/1999). Few changes have been made in the structures of the ministries.

The ministries focus on strategic steering, while the agencies see to operative tasks. Some duties and individual agencies have been transferred from one branch of government to another as a result of structural changes affecting the ministries and their administrative branches. Development efforts have mainly aimed at improving the Government's operation as a whole and the ministries’ performance.

More changes have been seen at the level of central administration agencies, resulting in fluctuations in their independence and powers. Central administration agencies and institutions have been merged and abolished, and new ones have been established. Some agencies have also been turned into state-owned enterprises, many of which have later been incorporated. Administrative reform has been promoted by centralising the administration's expert and support services to shared service centres. As an example, the Government Centre for Information and Communication Technologies (Valtori) was established in 2014.

The Government Programme of Prime Minister Sanna Marin outlines how regional state administration will be developed during this government term. The Government Programme notes that autonomous regions will enable a gradual transition to multi-sectoral counties. This will be prepared in a parliamentary process by the end of 2020. A study will examine which duties of municipalities, joint municipal authorities and the state are to be transferred to counties. The Government will prepare the necessary legislation once the parliamentary work has been completed. A parliamentary study will review the tasks of the National Supervisory Authority for Welfare and Health (Valvira) and the regional state administrative agencies with regard to the supervision, licensing and guidance of health and social services as well as the reorganisation of other tasks of regional state administration.

In recent years, the remit of many agencies in local state administration has expanded, often covering entire counties or even larger areas. Changes giving national powers to many local administration authorities are underway in the agency structure. These agencies will continue to have branches across the country.

The new National Prosecution Authority was launched on 1 October 2019, bringing together the Office of the Prosecutor General and five prosecution districts. At the beginning of 2020, the local register offices merged with the Population Register Centre to form a national Digital and Population Data Services Agency. Enforcement activities has also been reorganised in 1.12.2020 to only consist of a single level. The National Administrative Office for Enforcement and the 22 enforcement offices merged into a single national agency, the National Enforcement Authority.

Other forms of central government activities

State-owned enterprises include Senate Properties in the Ministry of Finance's administrative branch and Metsähallitus in the Ministry of Agriculture and Forestry’s branch. Senate Properties is a central government organisation with expertise in work environments and facilities. Metsähallitus manages business operations associated with state-owned land and water areas and performs public administration duties. While the finances of the state-owned enterprises are not included in the Budget, they do not comprise special assets, as the central government is ultimately responsible for their commitments.

The central government has 31 special-assignment companies. As the owner of special-assignment companies, the state has a special interest relevant to regulation or official duties: the company has an industrial, social or other political task or some other special role determined by the state. For more information on state-owned companies, visit the website of the Ownership Steering Department of the Prime Minister’s Office.

There are 11 off-budget entities. Under section 87 of the Constitution, an extra-budgetary fund may be created by an Act, if the performance of a permanent duty of the State requires this in an essential manner. However, the decision of the Parliament to adopt a legislative proposal for the creation of an extra-budgetary fund or the extension of such a fund or its purpose must be supported by at least two thirds of the votes cast. The off-budget entities do not have independent funds, as their cash reserves are part of the state's funds (excluding the State Pension Fund).

For more detailed descriptions of each off-budget entity, see the Government Annual Report