Around four-fifths of central government budget appropriations are allocated in accordance with the spending limits framework, which is binding for the whole parliamentary term.

According to Prime Minister Sanna Marins’s Government Programme, the expenditure ceiling will be EUR 1.4 billion higher in 2023 than in the technical spending limits (4 April 2019) (at the 2020 price level), including unallocated reserves of EUR 0.1 billion and a supplementary budget provision of EUR 0.1 billion, which were not included in the technical spending limits. The measures in the Government Programme and other measures will be implemented to the extent possible within the spending limits framework.

The expenditure ceiling in 2020–2022 will take into account a reserve of EUR 300 million for the purpose of supplementary budgets.

The Government is committed to observing the General Government Fiscal Plan and the first spending limits decision included in it.

The purpose of the spending rule is to limit the total amount of expenditure incurred by the taxpayer. When changes are made in the Budget that are neutral from this perspective, corresponding adjustments may be made in the spending limits of the parliamentary term.

According to Prime Minister Marin’s Government Programme, a mechanism will be introduced for dealing with an exceptional economic situation (the ‘exceptional situation mechanism’), which aims to ensure that economy policy can respond in the manner required by the economic situation. For the purposes of the mechanism and in view of the employment goal and the objective of balancing general government finances, there is an exceptional situation if the global economy and especially the euro area experience a serious economic downturn and this pushes Finland’s economy into the same situation, or Finland’s economy experiences a serious economic downturn due to a temporary disturbance that is independent of the Government’s actions. With the exceptional situation mechanism, up to EUR 1 billion, but not more than EUR 500 million per year, can be allocated to one-off expenditure altogether in 2020–2022 without reference to the spending limits.

In March 2020, the Government, together with the President of the Republic, announced that Finland was in emergency conditions due to the coronavirus situation. The Emergency Powers Act was also invoked. Under these circumstances, the central government spending limits have not posed restrictions to 2020, which has involved temporary and targeted measures such as combating the impacts of coronavirus on health and the economy.

Expenditure outside the spending limits

Outside the scope of the spending limits are particularly expenditures affected by cyclical fluctuations and automatic stabilisers, i.e. 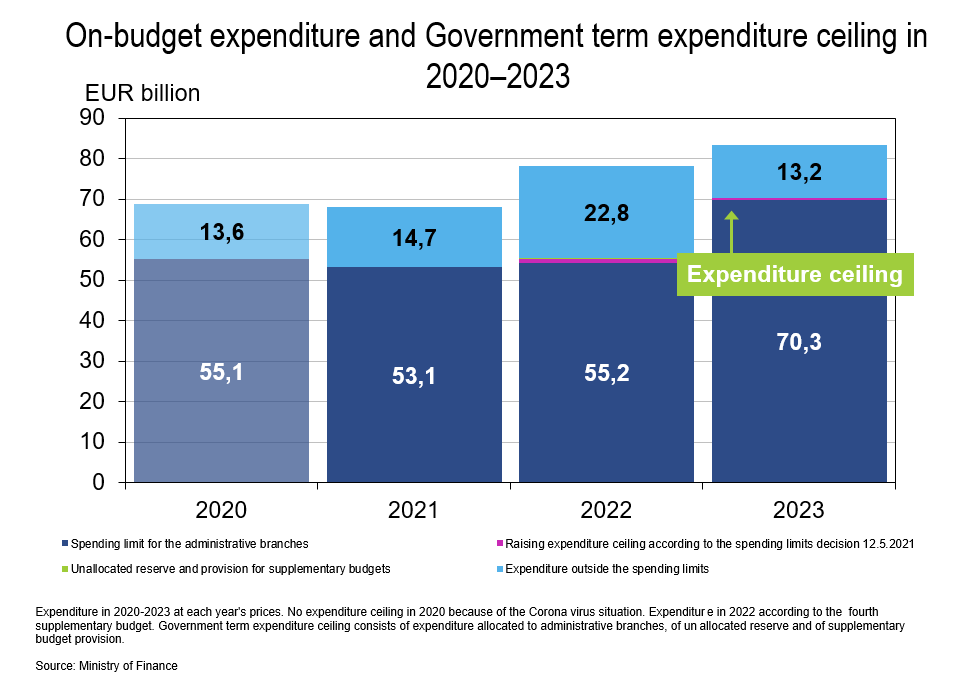 The Government’s operations and finances are planned for several years ahead. The goal is to ensure that the ministries take the Government’s financial and operating policy guidelines into account in their fields of activity. Planning covers the setting of objectives as well as analyses of actual costs and periodic evaluations of financial management.

Operational and financial planning is the basis for preparation of the central government spending limits and the annual Budget. Each ministry’s spending proposal includes a baseline scenario stating the level of appropriations already decided. In addition, each ministry may submit development proposals as well as an estimate of administrative branch appropriations that fall outside the scope of the spending limits and revenue estimates.