Presidency of the Council of the EU
Competitiveness, climate and security Finland’s priorities for finance ministers’ talks 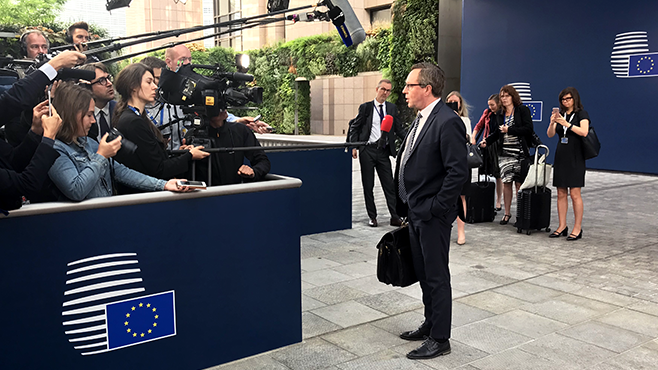 Finland is set to present its Presidency work programme to EU finance ministers in Brussels on Tuesday 9 July. The Economic and Financial Affairs Council (Ecofin) will be chaired by Minister of Finance Mika Lintilä.

“Finland’s Presidency will strive to promote the Union’s competitiveness and social cohesion, seek ambitious progress in combating climate change and comprehensively protect the citizens of Europe against internal and external threats. Economic and financial affairs play a key role also in this work,” says Minister Lintilä.

As regards financial markets, Finland aims to take up the work to reinforce the Banking Union and develop the Capital Markets Union. The aim is to make the European banking sector more robust and resilient and to boost cross-border investment.

Read more in these backgrounders:

Finland will promote a fair, simple and effective system of taxation that boosts economic growth, competitiveness and employment. It also aims to carry on the work against tax evasion and tax avoidance.

The discussions during the Presidency will focus on topics such as

Finland is aiming for a simple and effective framework for economic policy coordination in which each Member State is responsible for its own economic policies.

Finland will highlight the importance of better integrating climate change mitigation into the work of the EU’s finance ministers. The aim is to develop a common action plan on this question.

In security-related issues, Finland’s Presidency, working closely with the Foreign Affairs Council, will focus on the European financial architecture for development. This work aims to contribute to addressing the root causes of migration in the Middle East and Africa.

The Council is set to adopt country-specific recommendations to the Member States. The recommendations are part of the European Semester, which provides a framework for the coordination of the member states’ economic and budgetary policies.

The Ecofin Council’s agenda also includes the state of play of the own resources system in the next multiannual financial framework. Finland’s Presidency aims to clarify the discussion on possible new own resources.

On Monday 8 July, Minister Lintilä will attend a meeting of the Eurogroup. Finland will not chair the Eurogroup, which has a permanent president.

The Economic and Financial Affairs Council (Ecofin) is one of the configurations of the Council of the European Union. The Ecofin Council adopts EU legislation relevant to its remit, often in cooperation with the European Parliament. It is also responsible for coordinating member states’ economic policies. Ecofin is made up of the economics and finance ministers from all Member States.

The Eurogroup is an informal body tasked with coordinating economic policies among the euro area Member States and promoting conditions for stronger economic growth. The Eurogroup consists of the finance ministers of these countries. The Eurogroup has no legislative function, but it does set out policy guidelines.