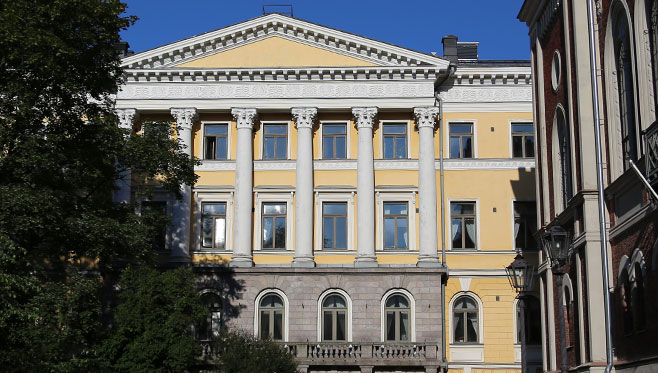 “Structural changes in the organisation are not the first option The working group proposes four sets of measures to improve the conditions for a more unified Government”, says LL.M Seppo Tiitinen, the chair of the working group, as he handed over the report ‘Unified Government is created through cooperation and coherence’ to the Minister of Local Government and Public Reforms Anu Vehviläinen on 18 April 2017.

The working group proposes a more harmonised staff policy to be followed within the Government. Compatible information systems and a common payroll system are also needed. All the ministries’ recruitments should take place at the Government Administration Department. An appointment board should be set up for the recruitment of top-ranking civil servants and for the assessment of their leadership skills. The number of such top-ranking civil servants is about 130.

The working group proposes that the Government Programme should be turned into an even more concise strategy document. The Government action plan should also be prepared under political guidance. The ministers would present the key issues in the action plan they are responsible for to the relevant parliamentary committee in terms of the ministry’s mandate.

Sufficient resources should be allocated for the preparation of extensive and far-reaching matters that concern several administrative branches. To support this, the Government plenary session could appoint fixed-term bodies.

Good legislative drafting practice, use of committees and appointment of Directors of Legislative Affairs

What is particularly important in legislative drafting is the correct timing of political guidance and enough time and sufficient resources for the preparation by the civil servants. The quality of legislation could be improved through cooperation between the ministries and by taking the statements of the Council of Regulatory Impact Analysis into account in the legislative proposals.

The committees should be used more broadly in the preparation of projects with significant societal impact.

The working group also proposes that in each ministry there should be the office of the Director of Legislative Affairs. The resources of the Ministry of Justice should be strengthened, especially with regard to questions concerning constitutional and other public law, to improve its capability to support other ministries in legislative drafting, where necessary.

No changes to the structure of the Government

The working group proposes no changes to the structure of the Government’s organisation. The best way of moving towards the unified Government set as the target is by harmonising the operations and practices.

The term of the working group on the development of the Finnish Government was 12 February 2016–31 March 2017. The working group was chaired by LL.M Seppo Tiitinen and the vice-chair was LL. Lic. Jakob Söderman. The members of the working group were Member of Parliament Tapani Tölli, Valtiopäiväneuvos (honorary title) Raimo Vistbacka, Director-General Olli-Pekka Heinonen (until 15 October 2016 Permanent Secretary) and Director of Legislative Affairs at the Ministry of Justice Tuula Majuri (until 30 September 2016 Senior Adviser for Legislative Affairs). The secretaries were Ministerial Adviser Jarmo Huotari and Department Secretary Seija Ahlqvist from the Ministry of Finance.

The report on a unified Government is part of the Government’s key project ‘Management and implementation will be improved’.

Unified Government is created through cooperation and coherence – report

Conditions are favourable for economic recovery